The Medal of Honor Committee met in April 1998 to consider the nominations, and the Committee found that the actions of Deputy Marshall Parsons entitle him to posthumously receive the Law Enforcement Medal of Honor.

According to newspaper accounts at the time, Marshal H. Shields was summoned to a Centralia hotel on Tuesday morning, June 30, 1903, after a man who was living at the hotel made some obscene remarks to some children.

The Marshal contacted the man, who gave his name as John Smith. Marshal Shields decided not to arrest him at that time, but to first obtain an arrest warrant the next day. He instructed Deputy Marshal James C. A. Parsons to watch Smith. 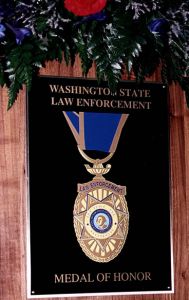 In the late afternoon or early evening hours of that same day, Smith became disorderly and Deputy Marshal Parsons attempted to place him under arrest. Smith resisted arrest, and a gun battle ensued. Both men were armed with revolvers. Several shots were exchanged; the Deputy Marshal emptied his revolver and borrowed another from a saloon. Smith finally shot and killed Deputy Marshal Parsons, then fled Centralia.

Local newspapers recount the pursuit of Smith by a posse and numerous sightings of him as far away as Tacoma in the days following the murder, but no record of his apprehension has been found. A post-mortem examination revealed that Deputy Marshal Parsons was killed by a single gunshot wound to the chest.